Welcome to Ohiniya Rhodesian Ridgebacks. We are Wilco and Nike, and together with our sons Raf, Senn and Tim, our Rhodesian Ridgeback girls we live on the countryside in the province of Zeeland, Southern Netherlands. My love for this breed started back in 1993 and one year later my first Rhodesian Ridgeback came into my live, Rhaisah. She took my heart and infected me with the Rhodesian Ridgeback virus, I was addicted. After studying the breed my dream became true in 2007 and with our first RR girls Neyja and Shira kennel OHINIYA was founded. The name OHINIYA means "Little Freedom" in the old Lakota language.

Neyja  (05 April 2006 - 12 November 2019, RIP) and Shira (12 Feb 2008 - 12 Oct 2018, RIP) were our foundation girls. Shira was imported from kennel Gunthwaite and Burncote in England in  2008. I just fell in love with her the moment I saw her. The combination of her beauty and naughtiness were irrisistable. And also her healthy and characterfull bloodline made her very interesting for me. So I took her home and she became the mother of our golden girl Kira, grandmom to our Dutch Champion Satinka and Binty (co-owned) and her great grand daughters Naira, Meggie (co-owned) and Niya (co-owned) and her grand son Kilat (co-owned).

With our Ridgebacks we would love to preserve this beautiful breed and hoping to bring with deliberate combinations the type of Rhodesian we like to breed, sweet, healthy and harmonious dogs, who are stable of character, pure, athletic and powerful bodies with an excellent and strong bone, but without declining towards massiveness. No-Nonsense Rhodesian Ridgebacks. Dogs who will fit into a family live, but without loosing their identity, dignity, stubborness and pride. A Rhodesian Ridgeback as a true Rhodesian is.

We do not breed often, but when we do, we choose very carefully those bloodlines with whom we want to improve the quality of the Rhodesian Ridgeback and to aim to the authentic type. Health and character are our main goal. That's why our dogs have been tested for several health issues and have passed this with cume laude.

We are a member of the Rhodesian Ridgeback Club Netherlands and also affiliated to the Dutch Kennel Club, the FCI and breeding accordingly their regulations.

We wish you a lot of reading pleasure on our website. 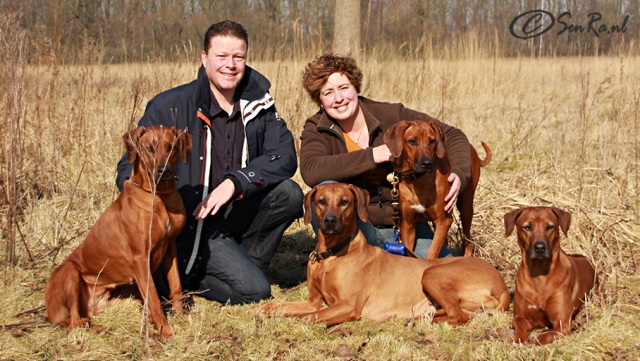